Our medical teams have continued to provide care to the people of Afghanistan throughout the current crisis.

Most hospitals and medical facilities across the country are under extreme pressure with staff and equipment shortages due to a severe lack of funding. Some are barely functioning or are closed altogether.

Since the change in power, Médecins Sans Frontières / Doctors Without Borders (MSF) has continued to provide life-saving medical care to people caught in the chaos.

For months, our teams have seen high numbers of patients in Helmand and Herat and are frequently working beyond their capacity.

The ripple effect of pre-existing sanctions and the financial measures against Afghanistan’s new government are being felt nationwide. The country faces near economic and institutional collapse and tens of thousands of people have lost their jobs.

The banking sector is paralysed, preventing people from accessing their savings and making it harder for organisations providing healthcare to pay salaries and cover the running costs of hospitals.

"Our main concern now is that we’re running out of beds. At the moment, it’s two families – one mother and one child – to every large bed."

MSF is working in Lashkar Gah and Kandahar, both in the south, Herat in the west and Kunduz in the north. MSF also runs a maternity hospital in Khost, in the east.

The information about our response, below, is correct as of 22 February 2022 and is likely to change.

Help us save lives

MSF teams are responding to the crisis in Afghanistan, providing medical aid, expertise and life-saving supplies during the escalating crisis.

We’ve been able to move quickly because we encourage supporters to give unrestricted donations – this means we can spend them where the need is greatest. Thanks to the generosity of people like you, there is no delay in mobilising, no wait for government funds to be released and no delay while fundraising appeals are launched. We can act immediately.

Our Afghan Appeal will fund MSF’s work in Afghanistan, as well as supporting our work in neighbouring countries.

Help us save lives

MSF teams are responding to the crisis in Afghanistan, providing medical aid, expertise and life-saving supplies during the escalating crisis.

We’ve been able to move quickly because we encourage supporters to give unrestricted donations – this means we can spend them where the need is greatest. Thanks to the generosity of people like you, there is no delay in mobilising, no wait for government funds to be released and no delay while fundraising appeals are launched. We can act immediately.

Our emergency response across Afghanistan

Boost hospital in Lashkar Gah, Helmand province, continues to be busy across all departments.

The hospital has been operating over capacity since September and had an overall bed occupancy rate of 120.9 percent in January.

In January, 1,832 women gave birth in our maternity unit. Also in January, an average of 42 malnourished children were admitted to the inpatient feeding centre each week, a slight decline from December (50 per week).

We continue to see large numbers of patients in our emergency room, with over 20,485 in January alone. We are also seeing high numbers of measles cases, with 607 patients diagnosed with measles in January, the majority of them children under five.

Most of the patients in the 35-bed isolation unit have measles and we have extra isolation capacity available if needed.

In January, our teams triaged 900 patients in its emergency room: 860 had been injured in accidents and 40 had violence-related injuries.

We admitted 103 patients for treatment, including 26 to the intensive care unit.

Our team carried out 220 surgical procedures, mostly for wound debridement and dressings.

Staff provided 990 consultations in the outpatient department, 360 for new patients and 660 for follow-up care.

We have also been vaccinating people against COVID-19.

In Kandahar we continue to run our drug-resistant tuberculosis project, with 49 patients still enrolled in the programme at the end of January.

A total of 22 patients were cured and discharged in 2021.

In September, we re-started screening patients for TB at Mirwais regional hospital, having put this activity on hold during the peak of the fighting in August 2021.

In December, we opened an outpatient feeding centre next door to our TB clinic, to provide malnutrition care to children aged between six months and five years.

We screen children at Mirwais regional hospital and enrol those with severe acute malnutrition, while referring critical cases for inpatient treatment.

By the end of January we had screened 300 children and enrolled 51 patients in our programme.

In Herat, we saw a rapid increase in measles cases in the first six weeks of the year, with 427 cases between 1 January and 12 February.

The infection rate is rising and our staff in Herat regional hospital are currently seeing around 45 new measles cases each day.

We have turned one of the containers in the inpatient feeding centre into a measles isolation ward where we admit measles patients, whether or not they are malnourished, and our team is working to establish additional isolation capacity in Herat regional hospital.

In the final week of January we triaged over 1,200 suspected COVID-19 cases at Herat regional hospital, around 200 percent more than in the preceding weeks.

The hospital usually focuses on treating patients with complicated conditions, however, it was decided to expand the admission criteria to ensure that more mothers and newborns could reach safe maternal and neonatal care.

The hospital reverted to its original admission criteria on 15 December. In January, there were 1,914 deliveries, slightly fewer than in December.

There were 165 admissions to our neonatal ward in January, very similar to the previous month. We have also been vaccinating people against COVID-19.

Latest news from the crisis in Afghanistan 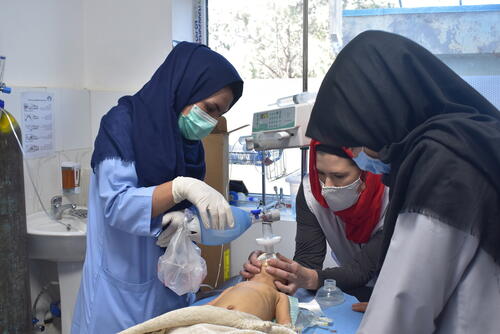 “We rushed her to the red zone”: Saving a young life in Afghanistan 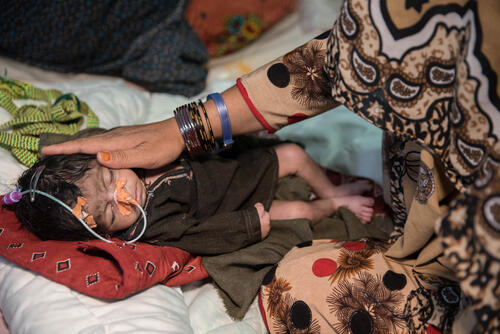 An Afghan doctor reports on a stark situation: a dangerous disease outbreak threatening a ward of sick children
Learn more