The roar, the fear, the bunker: My time at a frontline hospital in Afghanistan

The roar, the fear, the bunker: My time at a frontline hospital in Afghanistan

Gianna Falchetto is a nurse from Italy. She recently returned from an assignment with Médecins Sans Frontières / Doctors Without Borders (MSF) working at Boost Hospital in Lashkar Gah, Afghanistan.

Nurse Gianna Falchetto returns from Lashkar Gah, where her team worked under extreme pressure to keep a hospital running...

In the city of Lashkar Gah, Afghanistan, Médecins Sans Frontières/Doctors Without Borders (MSF) supports Boost Hospital. It's one of the largest public health facilities in the region, with a total of 300 beds available and staffed by around 1,000 people.

I worked there as a nursing director and I lived in Lashkar Gah during the hectic days of fighting that occurred in Summer 2021.

My year in Lashkar Gah was a very busy year. Every day, we could see the consequences for the community of insecurity that has been going on for years and years.

Poor access to healthcare and the risk of travelling led people to only make a journey when it was really necessary. This is why, very often, patients arrived at the hospital when their health conditions were already very serious.

The recent fighting has worsened the security situation, after we had already seen a deterioration in October 2020.

Back then, about 15,000 people had fled to neighbouring villages looking for a safer place to stay. Many had found help from their relatives while others had found temporary shelter.

Get the latest on our operations across Afghanistan

After a period of relative and apparent calm, the situation deteriorated again this May. The fighting intensified once more and moved closer to the city. The noises of the explosions were very loud and helicopters were flying much more often in the skies above Lashkar Gah.

One evening, as we were getting ready for dinner, we heard a loud explosion. Rockets had been fired at some buildings in the city, coming close to our house where the international MSF team was living.

It had never happened before and it could only be a bad sign. From that moment, there was an escalation of violence.

The clashes got worse very quickly. And, although previously our hospital was not primarily concerned with treating war trauma, since May we began to receive more and more patients with injuries from bullets, shrapnel, explosions.

Nights in the bunker

The situation worsened to the point of forcing us to sleep in the bunker under the hospital. This was so that we could stay close to patients and to those who continue to need us.

Around us, the city was deserted. All the shops were closed. The climate was surreal.

We spent 12 days in the bunker. We had mattresses on the floor and blankets so that we could rest whenever possible. This arrangement allowed us to continue to work with our local teammates and ensure continuity of care in the hospital.

In those days the number and type of patients we were seeing changed.

Usually, the hospital was full of children and adults with serious illnesses. However, in those two weeks, most of the patients were war-wounded. In maternity, where we usually saw around 80 births a day, it was barely 10.

The number of staff also decreased. Many of our Afghan colleagues were unable to reach the hospital or left the city to take their families to safer places. Those who remained shared the bunker when they needed to rest.

There were many women among the staff who stayed. They had told their families that if us women from the international team stayed to deal with everything that was going on, then they would stay with us.

The nights in the bunker weren't always easy.

In the dark the explosions seemed stronger than during the day, but we tried to support each other. The hospital was located right on the frontline, so bullets and shrapnel constantly flew into the grounds.

I have many memories of those days. I remember one night the deafening noise of a helicopter that, a few metres from the hospital, fired at its targets.

I also remember well one afternoon when a rocket hit the roof of the outpatient area of ​​our hospital. A place that should be safe had been damaged by the fighting, as had happened to other hospitals in the area.

Everyone was afraid. When that rocket hit the building, I and the other nurses on the international team were inside.

I remember a big roar, the rush to get to safety in the bunker, the fear.

I remember that, in those difficult moments, someone suddenly called for prayer and we all began to pray together. There was harmony and each in their own way prayed that everything happening would end as soon as possible.

In the middle of that tragedy and horror… we became a family.

During the daytime, I stopped to chat with the team. Everyone was working very hard but trying to keep morale high. Some told stories and even made fun of each other a little. Those were important moments that I don't think I'll ever forget.

An influx of patients

Then, one night, it was suddenly all over.

The constant noises of gunfire and shelling ceased. At that moment it no longer mattered. We were alive. I was alive.

One afternoon we went back to our house, which, fortunately, had not been damaged in the previous days. Everything was intact. We had been lucky. Even taking a real shower and sleeping in a real bed was great.

Support our work in Afghanistan and in neighbouring countries

The following days we resumed working normally with the full team. The streets became busy once again.

However, now that the fighting had stopped, many sick and injured people were finally able to travel to the hospital safely. Soon, our emergency room would be full one again.

We would reach peaks of 800 patients a day as we worked to treat those cut off by the conflict.

Decades of conflict have ruined Afghanistan’s economy and infrastructure, and many people rely on humanitarian aid.

Médecins Sans Frontières/Doctors Without Borders (MSF) provides emergency, paediatric and maternal healthcare in Afghanistan, which has one of the highest maternal mortality rates in the world.

In May 2021, there was a significant surge in violence, with fierce clashes between Afghan forces and the Islamic Emirate of Afghanistan (IEA, also known as the Taliban) claiming thousands of lives and forcing many more people from their homes. By mid-August, the IEA entered the capital city of Kabul and Afghanistan's President Ashraf Ghani fled the country. Throughout this time, MSF teams have continued to provide life-saving medical care to people caught in the chaos.

More news and stories from Afghanistan 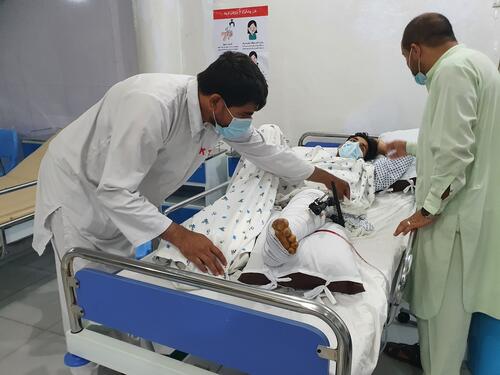 Afghanistan: Working together after the chaos in Kunduz 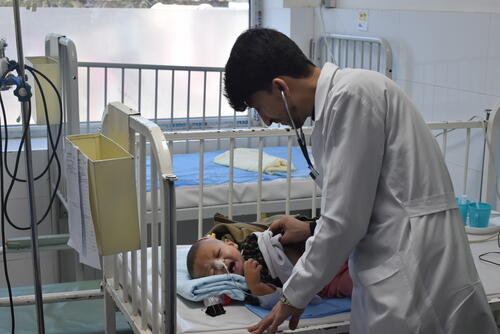 Afghanistan: "It feels like we are their last option" 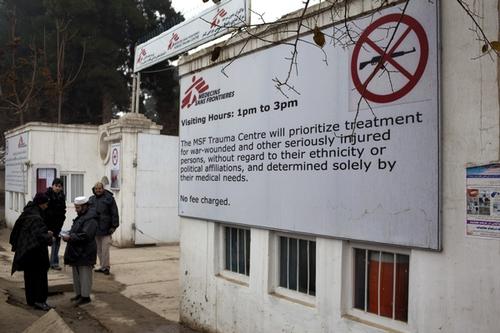 Afghanistan: Will we talk to the Taliban? We always have